“Never doubt that a small group of thoughtful, committed, citizens can change the world.”

― Margaret Mead
If you agree with the above quote, you can be ONE in Club of REMY!

Following footsteps of Macy Conferences and Club of Rome… updated to the Internet Age.

If you are viewing this website, you are invited to join the now forming Club of REMY, first step physically in the Washington DC metropolitan area, next step going online with Zoom platform, producing a new YouTube Channel.  The organizer Dr. Jason Jixuan Hu has relocated to the Washington DC area in 2019 to take care of the logistic issues of this operation.

REMY, sounds close to Rome, originally mean oarsman in French. It pairs with the root of “cybernetics”  (steersmanship). We as cyberneticians sometimes also need to row our boat as well. REMY is also the name of the building in which our physical meetings will take place and be video recorded. Most importantly, REMY serves as an acronym reminding how we choose our topics: Really-relevant- Emergency-Mindfully-minding You!  Here, REMY carries the same meaning of MIMU – the Most Important Most Urgent, the useful idea promoted by Dwight Eisenhower and Steven Covey.

Once you identified your REMY topic you want to talk in the club, please submit a one-page abstract or outline to us. We will post it on our website as well as send it out to our list. If your topic is really interesting, there will be other members signing up as discussants.  Once we have two or three discussants, we shall schedule a session for the speaker and the discussant, and making a video, and upload it to YouTube. Once our voices reach the public, let them roam around the world.

The online-meeting version will be conducted through Zoom online meetings.

Please start thinking about your REMY topics. Please send us your topic ASAP.

Your REMY topics will be posted on www.clubofremy.org. When you signing up, please also send your standard head picture and a one-screen length of your bio.

Looking forward to having some significant fun with you together! 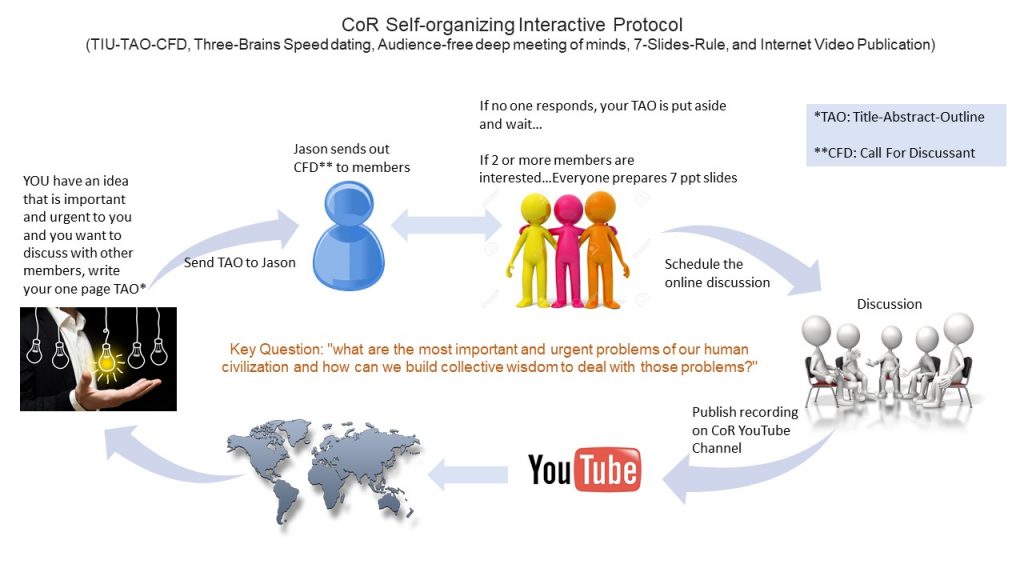 How Ignorant I Am – Clues for Developing a Better Brain via System Thinking: Knowing your Camera, your eyes, and your brain

Take your camera, open your eyes, touch your head, let’s tour a little bit inside your camera, your eye, and your brain. This talk offers entry-level ideas in cybernetics & System Science, System Thinking & ST Taxonomy, Personal Development and Brain Growth, and Constructivist Epistemology or Experimental Epistemology.

Taxonomy has been used to classify subjects of study, such as biological life forms, soil characteristics categorization, numeric algorithms, and vernacular naming systems, etc.  In the area of study of learning we have Bloom’s Taxonomy describing different stages of learning capacity.  In this program, a new taxonomy for various types of system thinking is described, more or less on a complexity scale or a natural sequence of learning them from easier to challenging: I.e., 1. Shopping list/finger counting; 2. Causality tree/fishbone; 3. Circularity Loos/Feedback & Feedforward; 4. Self-Organization/emergence and eigenstate; 5. Multi-Layer SO/Feed-up and Feed-down; 6. Multi-Agent SO/Ecology and Evolution; 7. Self-Minding with memory emergence (non-triviality) 8. Self-Guiding with internal model emergence; 9. Self-Goal-setting with purpose emergence; 10. Self-Reflecting with value-principles.

What Is This Thing Called Second-Order Science? – From the Science of Objectivity to Science of Shared Subjectivity

Pending discussion. Comprehensively define SOS and identify its natural emergence in Family Therapy, OD, Management Science, Political Science, and International Relations. (I.e., everything that lives on interactions among participants and between perceptions and action agendas.)

This program introduces Self-Organization (SO), followed by Multi-Layer Self-Organization (MLSO), Multi-Agent Competing Self-Organization (MCSO), and Dual-Value Oscillation System (DVOS) conceptual frameworks, identifying Cultural Gene sets as self-organizational agents in human societies and explain a number of key phenomenon puzzling some of us.  Borrowing the analogy of the roles of biological genes in biological evolution, cultural gene theory aimed at explaining the evolution of human civilization in terms of enrichment of cultural gene pool, mutation, and bifurcation, explaining a number of puzzling phenomena and challenging questions of our society poses for us today.

Base on Cultural Gene Theory, this program traces the stages of development of, and thus defines, Mainstream Civilization on this planet, highlighting its core universal value system and identifying the major milestones of key developments. Peripheral cultures missing such key developments are discussed, with possible future scenarios that the members of these peripheral cultures need to make choices.  An index vector is advocated to measure various societies and to identify directions of progress, more comprehensive than the popular but oversimplified economic indicators. Contributions from major religions to the index vector are identified. A Law of Covert-Wars should be implemented to against the previous disasters of the Abuse of Values. An alternative perspective different from the traditional geopolitical mindset emerges here, suggesting for the mainstream countries about more effective ways of forming alliances and identifying harmful cultural gene groups, instead of countries, to counter their threats.

The Bell-Curve 2.0 and Its Implication for Religions and Science, including Phenomena of Obscurantism and Conspiracy Theories

Cultural gene sets, educational systems, ideologies, and religions together as general information environment decide how the human brain develops after birth through adulthood in society. But even within the same developmental context, individual brains attain different levels of cognitive capability. The Bell-Curve 2.0 describes the (assumed) normal distribution of cognitive capability of any population within any given society, drawing the distinction of the differences in individual behaviors, beliefs, and political tendencies. This observation has explanatory power over the functions of religions and sciences in healthy societies and conspiracy theories and obscurantism in unhealthy ones. The world has never been and will not be flat at all and any true world-order can only be far-from-equilibrium type, so all kinds of utopian agendas should be abandoned, conspiracy theories be contained and obscurantism be fought against.

Five Major Threats to the Mainstream Civilization and Their Joint Danger

It is not new that we are aware of some individual threat against our civilization, such as communism, Islamic ideology, abuse of value from within our institutions, free-riders weighing down our social welfare system, and banality of evil infecting a lot of us. But viewing them all together as a systemic wicked problem that each of its elements enhances the others is a long neglection that we cannot afford to continue.  It is time that leaders in mainstream civilization be clearly aware of such joint danger and start finding effective strategies to counter these threats and defend our universal value system. These strategies may include drawing distinctions among the different cultural gene groups in communist societies and Islamic societies; institutionalize measures to counter abuse of values; overhaul the broken welfare systems, and advocate social responsibilities to fight the banality of evil. Combining spirits of Woodrow Wilson and Ronald Reagan, this film calls for an emergence of the new Leadership at our planet level and refute Fukuyama’s statement: Our history has not ended, it just begins.

Based on an understanding of how mainstream civilization evolves into the future, constructive efforts in organization and social learning would be prioritized on the effectiveness and efficiency of cross-perspective communications, i.e. to facilitate the emergence of collective wisdom from the interactions of individual intelligence. The theory of Communicatics provides an easy to understand and easy to practice skillsets that reduces frictions and misunderstandings in daily communications among people from different backgrounds with different concerns and different perspectives. Ten effective skills are discussed with examples that enable the audience to learn to use them immediately.

Build upon the foundations of Communicatics, which focus on self-improvement and personal development at the individual level, WINTOP Round-Table Leadership Program distilled a good number of organizational development principles and effective methodologies to improve the effectiveness and efficiency of any democratic group processes.

Four Strategies to Deal with China